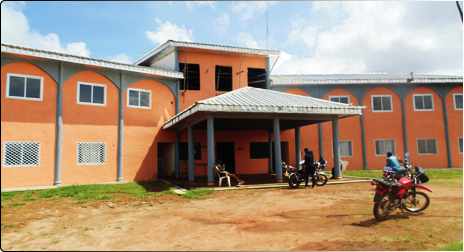 PNDP is an institution created by the state to accompany Councils in the decentralization process. It has a pivotal role in Council activities in the earmarked domains like, good governance, accountability, communication, capacity building, and introduction of the PRO-ADP and SIMBA soft ware to boast effective recording and management of the Council.

This explains why the PNDP and the Council are veritable partners. With the aid of different donors or funders, they strive to meet up with certain laid down principles and versions earmarked to realise the state’s target goals within a given timeframe. The third phase underscores the update of the development philosophy in accordance with the charging times for always.

The Council development plan, which was done in 2011 and validated by the SDO of Bui on the 24th March, 2012, could not stand the taste of time according to certain organizations like UNCHR, UNESCO, UN, UNICEF, IMF, ADB and IDB that took interest in certain components. These components were not taken into consideration such issues as climate change, childhood issues, successes, failures, potentials and obstacles of the 2012 edition, achieved in each community. So, there were an urgent need for the CDP to be updated to ensure the fulfillment of the Presidential instruction on choice of projects from CDP, henceforth, according to the World Bank and other donors’ presentation.

Furthermore, this essential exercise, which precedes the launching workshop of the update of the CDP, saw the participation of the numerous or different stakeholders in the process. The local support organization - Community Initiative for Sustainable Development (COMINSUD) was hired by the Nkor Council, in partnership with the PNDP, to facilitate the process in the forty-five (45) villages of the Council.

On the other hand, there was also the creation of a Steering Committee at the level of the Council, to be the watch dog of the ten months contract for the update of the CDP and implementation of local solutions by the Communities. There was a thorough training of members of the Steering Committee and the Local Support Organization (LSO) to ensure a successful update of the CDP; prior to the official start of the process in order to register resounding goals laid down at the beginning of the exercise.

Thus, the predominant aspects of the CDP included Baseline Data, Council Institutional Diagnoses, Council Urban Space Workshop, which had the Urban Space delimitated to a village with quarters on another dimension. The participatory village Diagnosis took care of the pertinent exercise.

The consolidation of the various diagnoses, mobilization of resources, planning, DIP 2018 and MTEF 2019 and 2020 is from April to the end of September 2017. Also, there was the implementation of the local solution identified by the different communities between September 2017 to December 2017 as well as from January 2018, there after onwards as per the plan of activities and their implementation to usher in the required development. The update of the CDP has created an opportunity for the recruitment of a Community Animator to accompany the Council in the implementation of the local solution.

There was also the SIMBA workshop on the update of the Council Budget, Administrative and Management Accounts as well as monthly trial balance, printed from the soft ware. More so, two consultants for hydraulics, public works and construction were recruited to carry out feasibility studies in the above mentioned domains in some villages of the Municipality for subsequent funding by PNDP in 2017 and 2018.

Finally, the long awaited heartbeat of the people; Noni Community Radio (Voice of Noni) equipment was received and installed. It has now gone operational leaving, the Municipality with a Communication legacy creating a historical development land mark for posterity to reckon with.

It is said, “A society grows great when old men plant trees whose shade they know they shall never sit under“. This assertion holds strong in this prominent African proverb which states that kola nuts last longer in the months of those who know its value”.

To evaluate these varied activities to be implemented in the Council, there was a joint mission from the PNDP, UCCC, Civil Society, FEICOM and MINEPAT to assess the Council’s use of the PRO- ADP and SIMBA soft ware in Management and functioning of the Council in the following documents: Budgeting, Accounting and Good Governance, follow- up of the CDP, Public Investment and Council Projects, recruitment of development and finance agents by the Council.

From the above discourse, PNDP has been prevalent in the Council from April, May and June 2017, to the best advantage of the institution. This has been in a bid to impact the lives of the common people. With the regular presence of PNDP, partnering and empowering the Councils, it is evident that by the time the decentralization process comes to fruition, the Councils would have gained grounds to be self-sustainable. Help.