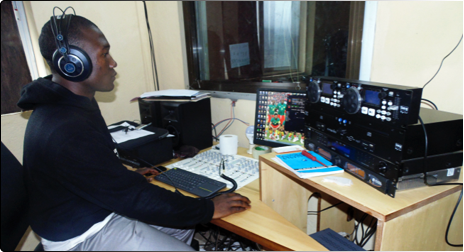 The Noni Community Radio (Voice Of Noni) Finally goes Operational !! Communication is a vital tool for any meaningful development in any community. It is generally considered that with the coming of new forms of communication, the world has become a global village.
Globalisation, which results from modern means of disseminating information, has largely galvanised the development process in the various domains of human life.

It is true that with the coming of the internet and other forms of advanced levels of communication, people can now easily reach each other with the twinkle of an eye. However, the scope of information flow through other media still has a limited audience compared to the broad spectrum of the radio.

In spite of the presence of the various modern methods of communication, the radio has continued to play a very vital role owing to its wider spectrum of giving out information. This is especially true in rural areas where most of the people are farmers, and may have very little time to either read newspapers not to talk of browsing. These village dwellers are more likely to listen to the radio after their farm work given that the radio does not only dish out news but is also a means of entertainment and relaxation. In the rural setting, therefore, communication certainly plays a cardinal role in development.

It is, probably, from this premise that PNDP saw the need to create community radios in Councils as one of its visions to assist these Local Governments that the Councils are in their development drives.
When Noni people got wind that they had been promised a radio, their anxieties were at its apex. Out of curiosity, some of the people would have wished that the radio be installed sooner than later.

Level Of Preparation For The Installation:

Given that there was a procedure to be followed for its installation, the people continued to wait for their radio with zeal. Then, as soon as work on the construction of the antenna mast and the sound proofing of the radio started, some doubting Thomases began to see how real the radio project in question was: a succinct indication that the radio was soon going to go operational.

Since anything that is meant to be of good standard requires some procedure to reach an acceptable level, PNDP followed up and carried out supervision at each stage of the process to ensure that everything was done within the specifications of the job. Having formed the radio management committee and recruited staff for the radio as requested for by PNDP, they were empowered for broadcasting.

To ensure protection of the equipment from thunder damage when installed, earthing of the entire building of the radio has been done and a thunder arrester installed. Electricity has been extended to the Council Building as the main source of energy in addition to the generator, with future plans to step up the solar energy supply.
With the completion of the acoustical works of the studio and installation of the antenna mast as well as other preparations, all has been set for our communication media to go operational.

Meanwhile, prove of readiness for the successful take off of the radio is seen from the furnishing of the radio department with a set of modern furniture for the Station Manager’s office, the Waiting Room, the Conference Room and the Secretary’s office.

To better prepare and provide the newly recruited staff of the radio with some background knowledge on the basics of journalism and to ensure readiness for their effective take off, a two day training workshop was carried out in February, 2017 on the Tips for Budding Journalists and the Principles of Good Writing.
In spite of all the various levels of preparations for the final installation of the radio, some detractors’ doubts could still be discerned from the manner they continued to react to the laudable idea of a community radio in Nkor Council.

It was all joy when the equipment was eventually brought in and information spread like wild fire in the villages of the Municipality. Those who saw the equipment went round as messiahs to spread the good news. The people’s anxiety to have the signals of the radio vibrate on air was relieved, when three days after (Monday 3rd July, 2017), the technicians who worked relentlessly on the installation of the radio sent the air signals to the villages of Noni and even beyond. This surely came like a dream but it was unlike other dreams which only end up as illusions. The Voice of Noni, as we chose to call the community radio, a valuable communication tool donated by PNDP, had finally gone operational.

This magnanimous gift will, henceforth, enhance easy flow of information within the Municipality. It will also link the people to the outside world as well as provide a forum for socio-cultural and educational development of the Noni Community and not leaving out the element of entertainment. Today, what looked like a dream has become a reality.

Having put everything in place, with constant follow up and keen supervision by PNDP experts, the take off of the radio went on without any major hitches. Those who doubted and probably thought of the installation of a radio in Noni as an impossibility, were shocked by the sound signals from the Noni Community radio itself, this time around, when they least expected it.

For now the radio is operating using a generator. All that remains to be done is to rectify the faults on the electricity line from Kumbo to Nkor via Banten-Diyri so that this vital tool of communication can function regularly and smoothly. The joy of the Noni people and that of listeners out of Noni, following the installation of the radio, is that they now enjoy the benefits of what a radio provides for its listeners. What a blessing to the Noni community!