The estimated surface area of Nkor Council is 325.7 Sq.km. The population of this Council area in 1987 stood at about 17,700 inhabitants. During the surveys the population obtained from all the communities summed up to approximately 63487 inhabitants see Table 3.2 below. This population is predominantly of the Noni ethnic group, sparsely settled across the Council area under ten (10) traditional Fondoms, with six (6) principal concentration zones along the Noni Ring Road at Mbinon, Lassin, Nkor, Dom, Din and Djottin. In addition to the indigenous Noni population, there is a growing trend for settler populations in the Council Area: a significant Fulani population, grouped into some eight (8) ardorates, is scattered across the entire council area, while a small colony of Nso extraction migrated from the neighbouring Kumbo subdivision and settled in Dom around Banten and Fofueng, and in some areas of Djottin around Buh, Mbiim, and Kerri (commonly referred to as Djottin-Nso).

Population figures of the communities 2011 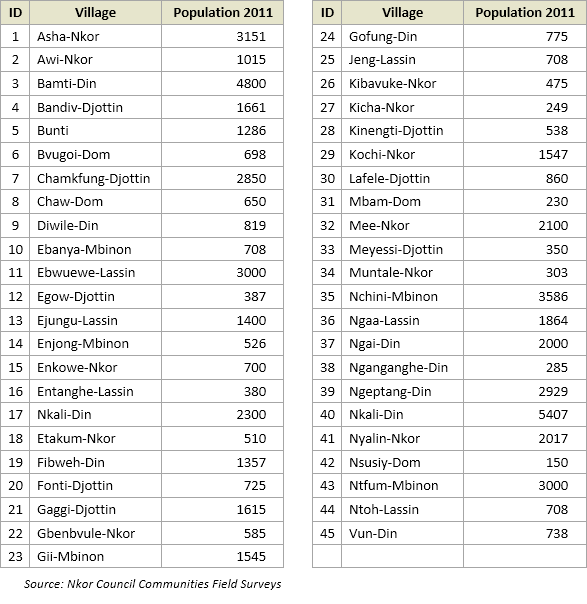 The Fulani are a group of West African pastoralists. They move over vast areas and come across many cultures and are known by different names. In Cameroon they are called Fulani by the Hausa. The word Fulbe, which is another name for them, was first used by the German writers to refer to the Fulani.

Legend says the Fulani originated from the Arabian Peninsulaand migrated south-west to Sene-Gambia. From there they moved eastward, crossing several Sahelian and Savannah zones. The Fulani of Nkor council and North West Region in General, are a part of this migrant ethnic population having common occupational and biogenetic characteristics: light-skinned with curly hair, pointed nose, thin lips, and slender statue.

Rapid population growth has a three-fold effect on the development of the Fulani. First, the population increase out-grows food supply. Second, social welfare amenities in the rural areas deteriorate faster than they can be replaced or repaired. Third, education increases the demand for the specialized needs of the future generation of the Fulani.

Typology of the Fulani leadership

Fulani have a quasi-government system. Contrary to popular belief, the Fulani have identifiable leaders with full or partial decision-making authorities. At the village level, for example, the settled Fulani have the Sarkin Fulani, a title that has existed since the Fulani came to Cameroon. Among the pastoral Fulani, sociopolitical structure centres on a typology of leadership consisting of the Ardo (the chief or the lineage head) and the Lamido.

The Fulani kinship represents an economic as well as a convivial unit, having common territory and occupation. The Fulani social structure consists of the ethnic group, clan, lineage, family, and Ruga (household). The ethnic group is the highest echelon and the conflation of the kinship groups. It embodies all members with a common origin, sharing a founding ancestor whose personage may or may not be known, or whose genealogical link may not be traced to individual members.

The Fulani are endogamous as well as polygamous. Celibacy is uncommon among the Fulani, who marry in their twenties. Divorce is also rare. As a result of polygamy and early marriages, the Fulani have high fertility. Despite high infant mortality, the population of the Fulani is growing fast, although slower than the national average. Household size is about six, with a nearly balanced sex-ratio. Age distribution is base-heavy, with children dominating.

The Fulani are governed by a political structure consisting of the ethnic group, the clan, the lineage, the family, and the Ruga. Leadership among the Fulani is less aristocratic. The family is a herd-owning unit, united by common territory and occupation. Their herding system, described in the section that follows, involves frequent pastoral movement.